LEESBURG, Fla. — Another heavyweight battle is on tap as 275 of the best college fishing teams in the country return to central Florida for the 2023 Strike King Bassmaster College Series at Harris Chain presented by Bass Pro Shops Jan. 26-27. 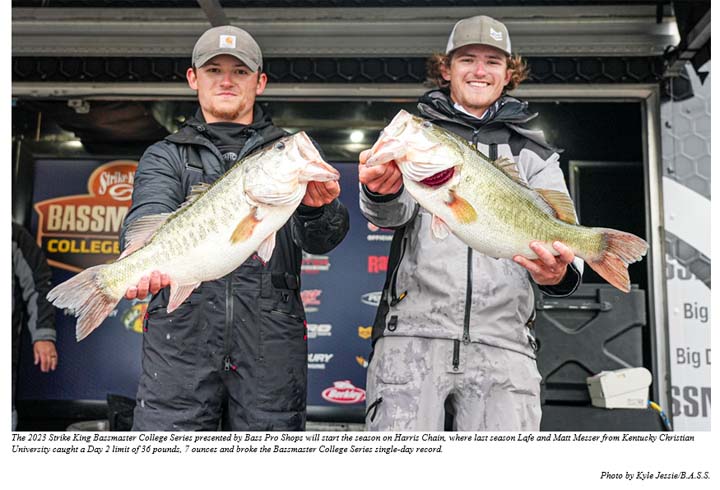 “I couldn’t predict what lake it is going to go down on,” Lane said. “They are all fishing that good right now. There will be opportunities for these college anglers to have five to eight spots they can run and feel confident about catching a 20-plus-pound bag on all of them. All of the lakes will produce a 20-pound bag this time of year.”

The last two trips to the Harris Chain for the College Series have produced some of the biggest bags ever. In 2020, the Bryan College duo of Connor DiMauro and Elite Series rookie Cole Sands captured 84 pounds, 12 ounces, the heaviest three-day winning weight in Bassmaster history.

Last season, Lafe and Matt Messer from Kentucky Christian University caught a two-day total of 61-13 to earn the victory, including a 36-7 sack on Day 2.

The College Series event will be followed on Jan. 29 by the one-day Strike King Bassmaster High School Series presented by Academy Sports + Outdoors and Bassmaster Junior Series tournaments, featuring 225 teams from 30 states. All events will launch from Venetian Gardens (Ski Beach) at 7 a.m. ET and return for weigh-in at 3 p.m. The Junior Series weigh-in starts at 2 p.m. on Sunday. Full coverage will be available on Bassmaster.com.

While the massive system used to be a fishery the locals only fished if there was a tournament scheduled, the Harris Chain has turned into a big-bass factory in recent years and that is largely because of the amount of healthy grass in the fishery.

“All of the lakes have some type of vegetation in them now,” Lane explained. “It could be eelgrass, coontail, hydrilla. Half of the Elite field’s weight last year came from Banana Cove where hydrilla was growing. Harris didn’t use to be known for the big fish it has today. It used to be behind Okeechobee, Toho, Seminole. You only went to Harris to fish a tournament, not to fun fish.

Lane expects the bass to be in full prespawn mode and approaching the areas where they will set up to spawn. Given the right conditions, some of the big largemouth might even begin their spawning rituals. He added that any of the eight lakes that make up the Harris Chain could produce a winning bag.

“January is when the big prespawn bass move to the last spots they will be (at) before they move to shore to think about spawning,” Lane said. “Shellbars will be key. The fish love to set up on the shellbars, and the shad love to swim through there. The big females are as big as they will ever be, and they are aggressive and feeding up before they move into spawn.

“What happens a lot of times is people think they need to fish shallow. But depending on the winter and if it is really mild and the moon happens to set up, they could very well be catching spawning fish. Those females will sometimes spawn in that offshore grass, right where they eat all year long.”

With fish in prespawn mode, Lane said three baits will almost always get the job done: a Berkley Slobberknocker, a lipless crankbait and a Carolina rig. The C-rig has been responsible for the two College Series victories previously mentioned and is a must-have when anglers go to the Harris Chain.