Prior to this event, 90% of the teams had never been to Lake Wedowee, but they were up for the challenge and ready to put their skills to the test. 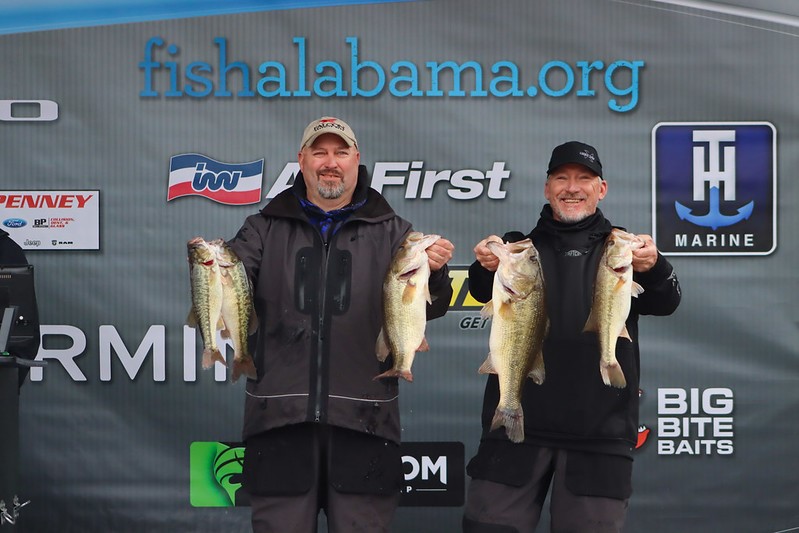 The first-place team of Rusty White, Jr. and Brian Elder weighed in 20.07 pounds of Lake Wedowee bass.  This was the first time Rusty and Brian fished an ABT event. They tried to get in last year but just missed out, so this year they were waiting as soon as registration opened and clicked send to sign up. Their plan was to “fish for big fish. We came to win. We could have gone down the bank and caught 50-60 fish, but we were fishing for big fish. We targeted a very specific structure and isolated cover. Big fish like isolated cover and structure adjacent to deep water. We knew we were going to have to fish behind others because the lake fishes small. When we made the decision to fish for big fish on the isolated stuff, we didn’t have anyone else fishing the same way we were all day.” For them, isolated spots were key along with water depth; “the boat was between 12-22 feet, so we targeted structure in 2-8 feet- small piles or small clumps of trees that came out of deep water that gave fish one thing to be the primary killzone.

Big fish always need the escape to deep water. We found this structure by looking at the bank and watching how the bank moves. If the bank looked flat and ran deep, we looked for the high spot on that bank or a cluster of trees that was the only spot on that bank, and that was where we found the fish. We spent the day using baits with red hues for the most part.” The Strike King custom-painted Chick Magnet crankbait was used to target fish in the 5–6-foot range. For the fish that were a little deeper, a Blue Ridge Bait Company Roller Shad crankbait was used. A third productive bait was Roller Spinnerbait by True Shot Custom Lures. The spinnerbait has big painted eyes and the twist eye wire tie vs “R” bend prevents losing fish.” For their win, they collected $25,000 plus an additional $1000 for a 7.60-pound big fish payout. 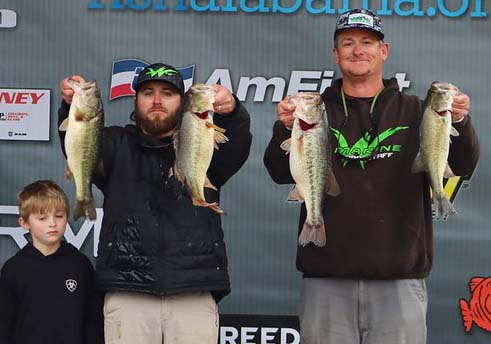 The second-place team of Brian Adamson and Ryan Lloyd was one of the hometown teams. ABT photo

Wedowee. “This is the biggest event ever at Lake Wedowee, and the whole community has been looking forward to it.  Wedowee is a very small town; we have a Jack’s, a grocery store, and a couple of gas stations, and when the ABT comes, it really makes a big impact on the community.”

Their original plan was to fish shallow, so they spent lots of time in practice trying those areas. “We really know this lake well as shallow, but the fish just were not there for us in practice.” They made the decision to fish a little deeper and target one primary spot. “We went out today to catch as many as we could and as big as we could. For the first hour of the day, we caught them every cast and quickly culled up to around 17 pounds. We fished on the south end of the lake on a main river flat with a sunken boat for structure and a huge school of fish on it. We caught at least 100 fish and left them biting. It turned out that the largemouth quit biting and the smaller spotted bass kept feeding- we just couldn’t get the largemouth to bite again. We left the main area and went to skip docks. At the first dock, we culled up one fish to get us to the 18.50 pounds; after that, we never culled again.”

The key baits in this 2nd place finish were; Zoom Swimmer swimbait in shad color, Strike King 6XD Citrus Shad, and a Big Sac brown jig. “This was probably the most fun tournament we have ever fished combined with anxiety going into the event added that normally the home guys never do well in these events. We really were happy with the finish.” The $12,500 second place prize combined with the Phoenix Boats prize of $2,500 combined for a total payday of $15,000.

Jonathan Collins and Derek Hicks are no strangers to the ABT leaderboard. They finished in third place with 17.87 and $10,000. Their style of fishing was perfect for this lake. Derek is known for his Tunnel Hull and the ability to go shallow to get to the fish.

They made a run up the Little Tallapoosa River as far as they could go to find fish in the current. They traveled about 10 miles up past the old 431 bridge 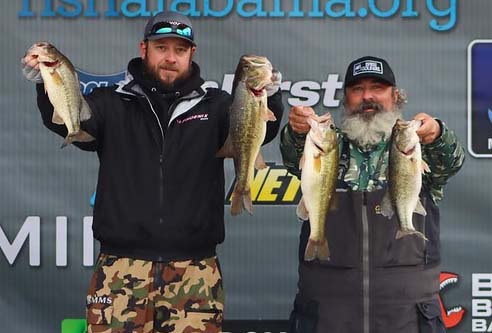 where most people would have stopped. They targeted fish on chunk rock banks with wood and fished the eddy using a 5/8 homemade jig that Derek ties with a Zoom Super Chunk in black and blue, a Zorro 5/8 Bango Blade spinnerbait that has been modified with new blades, and an out-of-production Sonny McFarland Spring Craw crankbait. They were amazed at how much current was up there and was happy to find it. “You wouldn’t think it was the same lake when you get up there. This is our style of fishing and how we want to fish; we will be back here to fish again in the fall to give it another try.”

The top five standings are below for a complete list of standings please visit: https://www.alabamabasstrail100.org/lake-wedowee-results/ 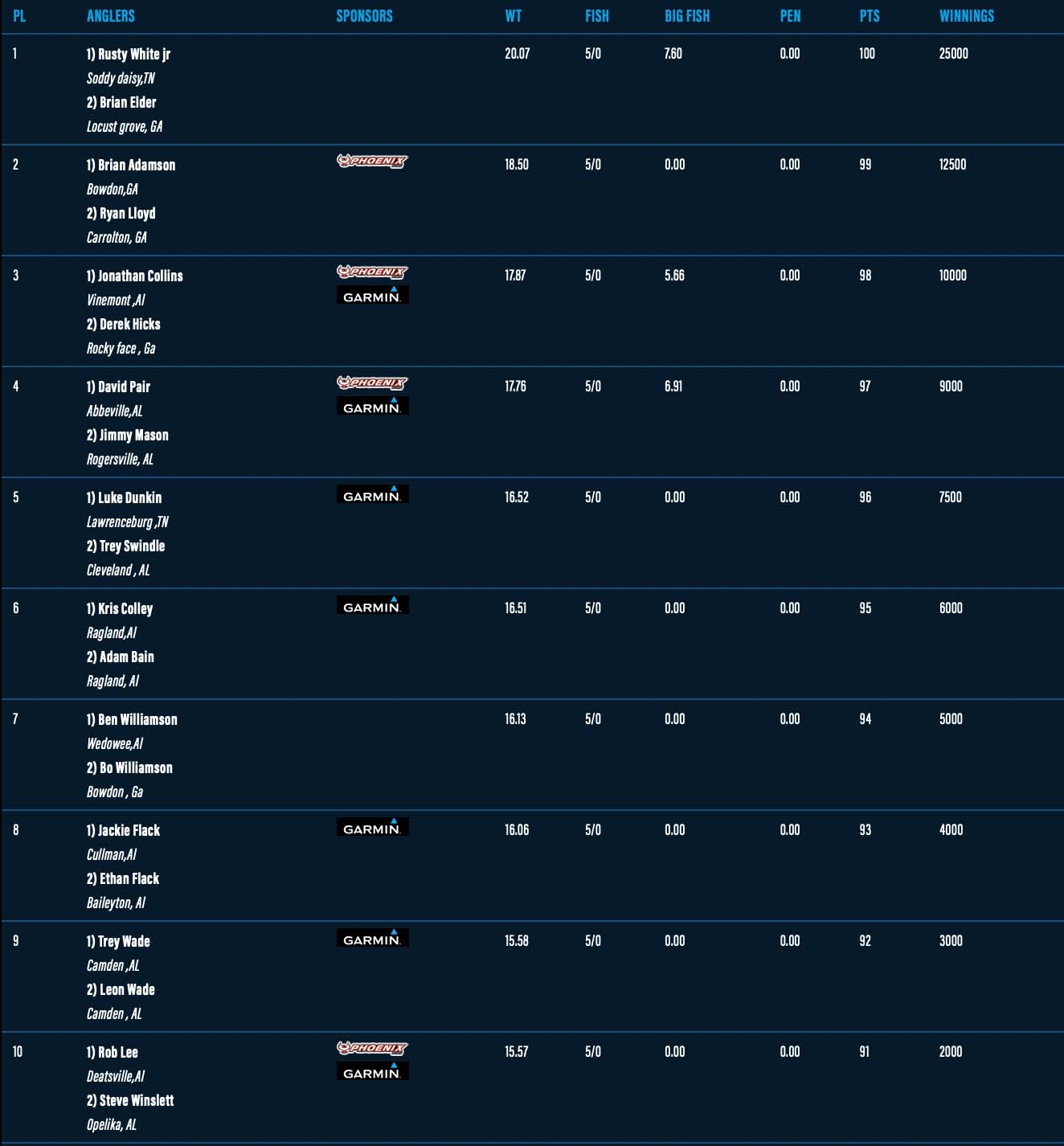