The product line of Bass Assassin includes:
• 5″ Vapor Shads have our Combo BANG scent and our liquid salt infused in them, so you know that they work. They also have a slit in the belly.
• Tapout and 4.5″ Lit’l Tapper new BANG Lure worm. They have a Combo BANG scent and liquid salt infused.
• 7” Rail Worm is a part of their BANG Lures lineup.
• 4” Pure Craw is another product in the BANG Lures product lineup. The crawdad has been redesigned with new claws and a thicker body to give it a more life like reaction. These lures are infused with the Combo scent BANG Fish Attractant and their new liquid salt formula. 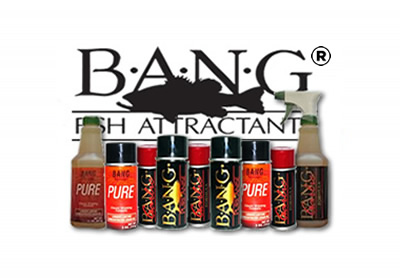 • HPC- (Heavy Punch Craw) 4″, built for pairing with heavy punching gear, the Bass Assassin Heavy Punch Craw (HPC) delivers a bite-inducing craw imitation that is right-at-home underneath matted vegetation. Designed with a round, ribbed construction, the Bass Assassin Heavy Punch Craw provides more-than-enough body to accommodate larger gauge hooks. At the top, the Heavy Punch Craw (HPC) is shaped with a pyramid-like taper that snugs nicely against concave punch weights. Delivering multi-dimensional attraction, featuring two large, flailing claws that move plenty of water and are built to accommodate a rattle. Infused with a heavy dose of our BANG scent.
• Fat Job, 5.25″ is a brand new BANG Lure. This lure has the Bass Assassin Combo BANG scent and liquid salt infused in them.
• 6″ Ding Dong has the Combo BANG scent and liquid salt infused in them, so you know that they work. The Ding Dong has a very unique tail that gives unbeatable action.
• Die Dapper lure is the first in their new BANG lure line. Enhanced with Bass Assassin’s BANG Fish Attractant and the new liquid salt impregnated into the plastic.
• 4.7″ Boss Shiner. The Boss Shiner can be fished in many different ways. Designed to swim it in deep water around the dropoffs or flats over grass. Use your imagination. The oversized tail gives the Boss Shiner a lot of movement in the water and the rings on the body displace even more water. Fish this on Bass Assassin’s new 5/0 weighted Swim Hooks.

All products can be seen on Bass Assassin’s website, http://bassassassin.com/ .