Who is Southern Fishing News

Prior to the establishment of Southern Fishing News, the publisher and editor, Ron McDonald, aka “Ronnie Mac”, got involved in the bass fishing industry while still on active duty with the Army as a helicopter pilot. A trip from Ft. 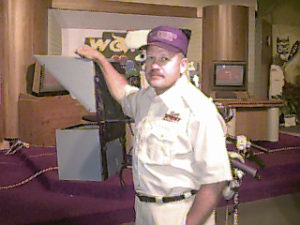 The show was broadcast from a local TV station based in Florence, AL. Southern Fishing’s television show ran for two years, first as a thirty-minute production once a week, then as a nightly part of the station’s news broadcast five nights a week.

The next incarnation of Southern Fishing was in the form of a tabloid, printed monthly publication. The print newspaper was distributed across north Alabama and was published for several years. However, the reduction of available time lead to a suspension of producing the print publication and a general absence of Southern Fishing for several years from the bass fishing scene in the greater North Alabama area.

Re-entry into the world of bass fishing news publishing came in the form of email news to the Southern Fishing database of anglers. That list, and the readership, has grown to over 2000 addresses.

Next was a leap into the social networking world with the addition of a Southern Fishing Facebook page. Our Facebook page (now two pages) is a great outlet for story links to our website, announcements, news, photos, and a partner for our email news. 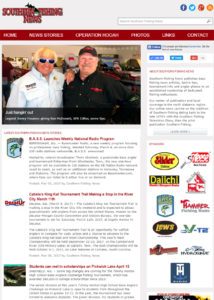 Last but not least is our Twitter account, @southfishnews, where we send out headlines and story links about material on our website. We can’t leave out the online Photo Albums and YouTube videos. Also in the mix are the Student Angler Series classes for high school bass clubs.

The synergy created by these points of distribution is available to you for bass fishing product news, stories, news releases, photos, and videos.