ABT Announces Expanded Television Coverage in 2023

Decatur, Ala. – The Alabama Bass Trail (ABT) is pleased to announce additional television air time for the 2023 season. 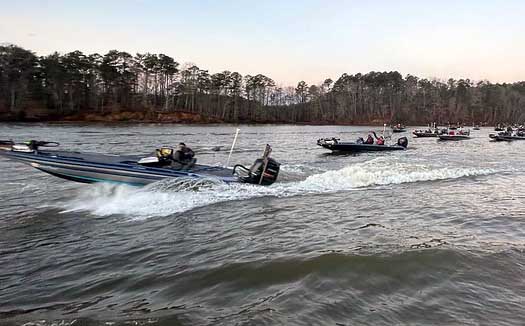 Take-off on Lake Martin. ABT photo

This is part of ABT’s commitment to growing the sport of tournament bass fishing, reaching more fans, and bringing more publicity to the anglers, host cities, and sponsors. ABT will appear on network television next year beginning in April when its Tournament Series airs on Bally Sports Southeast. Fourteen episodes and over 100 re-airs will be televised on Sunday mornings over a 38-week period.

Bally Sports Southeast will televise 14 original 30-minute episodes to over 8.9 million homes on Sunday mornings at 7 a.m. CST in 2023. Each show will feature a different tournament location with footage taken on the water, during takeoffs and weigh-ins and also includes in-depth interviews with the tournament winners.

The ABT introduced television coverage to its fans in 2016 with episodes airing from July through December each year. In 2023, the first episode will air in April, with each episode airing for two weeks providing additional opportunities for fans to watch. Episodes will run from April 2 to December 31, 2023.

ABT Program Director Kay Donaldson said, “We are excited to expand our television coverage for Alabama Bass Trail TV in 2023, and bring the tournament action to our fans sooner. This new format will allow us to cut down on the time from when the tournament takes place to the time it is aired on television. Each tournament will receive at a minimum of two replays providing more opportunities for our fans to watch while generating valuable publicity for the host city and sponsors of the Alabama Bass Trail Tournament Series.”

Produced by AnglersChannel, each episode of Alabama Bass Trail TV takes viewers inside the boats of the competitors as they navigate the lakes of Alabama. In addition, viewers are also introduced to local eateries and attractions in the host city of each tournament location.

Bally Sports Southeast is an American regional sports network owned by Diamond Sports Group, a joint venture between Sinclair Broadcast Group and Entertainment Studios, and operates as an affiliate of Bally Sports. Headquartered in Atlanta, Georgia, the channel broadcasts regional coverage of sports events throughout the southeastern United States and is available on cable providers throughout Georgia, Tennessee, Alabama, Mississippi, South Carolina, and parts of North Carolina. It is also available nationwide on satellite via DirecTV. The channel’s programming reaches an estimated 8.9 million cable and satellite subscribers. For more information, visit https://www.ballysports.com/south/.

AnglersChannel will continue the five hours of live streaming on the water at each event and will film and produce the ABT television series for Bally Sports Southeast.

“We continue to receive excellent reviews from viewers, our anglers, sponsors, and host cities. Because of the tremendous response we have received, we look forward to expanding the television coverage in 2023,” added Donaldson.

Sanctioned by BASS (Bass Anglers Sportsman Society), the ABT Tournament Series gets underway on February 11, 2023, on Lewis Smith Lake and concludes on Oct. 20-21, 2023, with the championship on Weiss Lake.