The 2022 B.A.S.S. tournament schedule continues to take shape as organization officials announced today the slates for its College, High School and Junior Series. 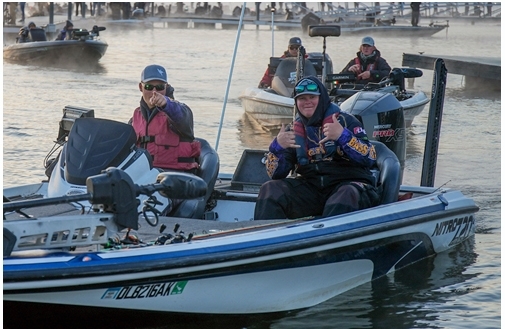 The Bassmaster College, High School and Junior tournament trails offer young anglers an opportunity to compete on a range of fisheries during the 2022 season.  Photo by B.A.S.S.

The events have been a valuable tool for encouraging youth fishing participation across the country, and they’re beginning to have a pronounced effect on the highest levels of professional bass fishing. Since B.A.S.S. started these circuits in 2013, there has been a 97% growth in the number of participating schools and clubs at the college level while the high school and junior tournament level has seen an astounding 724% increase in the number of clubs and schools competing.

“There are already former college anglers sprinkled throughout the Bassmaster Elite Series field,” said Hank Weldon, the longtime High School and College Series tournament manager who was recently promoted to tournament director of the Bassmaster Opens. “Just this year we saw former College Classic Bracket winners Jacob Foutz and Cody Huff qualify for the Elites through the Opens.

“I think it’s just a matter of time before the majority of the Elite field will have some kind of experience in our youth programs.”

The Bassmaster College Series presented by Bass Pro Shops will open at the Harris Chain of Lakes in Leesburg, Fla., Jan. 21-22. As most early-season Florida events are, the tournament should be dominated by hefty prespawn and spawning largemouth.

From there, the series will feature four events in four states from March through June. The schedule will continue with an event on Lake Norman in Cornelius, N.C., March 25-26, followed by tournaments on Norfork Lake in Mountain Home, Ark., April 22-23, and Saginaw Bay in Bay City, Mich., June 9-10. Those teams who register but remain on the waitlist for the four regular-season events will enjoy an opportunity to qualify for the College National Championship via the Wild Card tournament on Logan Martin Lake in Lincoln, Ala., June 17-18.

“We have a good mix of teams that are only able to fish the events in their region and teams that travel to multiple events throughout the year,” Weldon said. “A schedule that spans from Florida to North Carolina to Arkansas to Michigan and then back to Alabama provides great opportunities for both of those groups.

“If you’re traveling with the series, you’ll be fishing a very diverse collection of fisheries.”

Like the College Series, the two groups of younger competitors will open their seasons in Leesburg, Fla., on the Harris Chain of Lakes on Jan. 23. The standard format is for all Junior Series competitors (second through eighth grade) to weigh in first, with the champions being crowned before the High School Series weigh-in begins.

From Florida, the trail will visit Lewis Smith Lake in Cullman, Ala., on March 13, Norfork Lake in Mountain Home, Ark., April 24, and Saginaw Bay, Mich., June 11.

“I think people who have followed the High School and Junior Series have been amazed, not only by the knowledge these young anglers have of the sport, but by the size of the fish they bring to the scales,” Weldon said. “What they know and how they perform at such a young age really shows how the sport of competitive bass fishing has evolved — and gives us a good idea of the kind of competition we’ll see at the higher ranks in the future.”

During the 2021 season, Hayden Scott and Griffin Fernandes of Adrian College in Michigan won the College Series National Championship on the St. Lawrence River in New York. Then Bethel angler Tristan McCormick claimed a Classic berth by surviving four days at the College Classic Bracket on the Coosa River in Alabama.

Anglers can register for the next charge toward a championship on the following dates: Dec. 7 (College), Dec. 8 (High School) and Dec. 9 (Juniors). Registration will take place online at Bassmaster.com.