COMMENTARY ON PFOS PART ONE: What is PFOS and are there any dangers

Southern Fishing News (SFN) posted a perfluorooctane sulfonate (PFOS) warning on the SFN Facebook page in response to an Advisory from the Alabama Department of Public Health (ADPH) for a segment of Wheeler Lake seven miles long. This “Advisory” was published on a specific location on the Internet. I was not familiar with the website and doubt you are either. The ADPH Advisory URL is:  http://adph.org/tox/assets/2015_Advisory_small.pdf .

An email communication with ADPH Environmental Toxicologist, Dr. John Guarisco, was initiated to question why warning signs had not been posted at access points/ramps on Wheeler Lake to inform the public. Dr. Guarisco responded to my question by telling me signs are not posted about advisories since ADPH posts the advisories on their website. He also pointed out that advisories change from time to time negating the need for posting warning signs. This particular advisory has been in effect for three years but only publicized this year.

Posting warning signs is the responsibility of ADPH according to another reliable state source. Dr. Guarisco seemed to have a lot of historical information regarding warning signs to not be responsible for posting them as he stated.

Aside from the question of whether or not ADPH has the responsibility for posting warning signs, isn’t the trouble of posting, removing dated signs and replacing a few vandalized signs worth keeping a single individual from being contaminated? PFOS is a dangerous chemical. 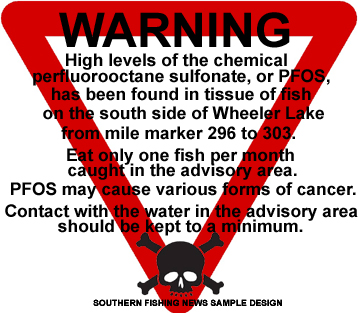 The “Warning Sign” you see to the left is one created by SFN for use in our PFOS commentaries and warnings.

I have written several “parts” in a commentary format to communicate to the public what the “PFOS” issue is all about. “Part One” is intended to communicate what “PFOS” is and if there are any dangerous or significant impact on humans and wildlife exposed to this toxic chemical. By “wildlife” I refer to fish and turtles in Wheeler Lake, birds, ducks and the shoreline wildlife like raccoons even squirrels. Part Two deals with PFOS and the fisherman on a personal level. My Part Three is pending data and information from the Alabama Department of Environmental Management.

Wikipedia’s page on PFOS has a lot of educational information. Wikipedia states, “In 1949, 3M began producing PFOS-based compounds by electrochemical fluorination resulting in the synthetic precursor perfluorooctane sulfonyl fluoride.]In 1968, organofluorine content was detected in the blood serum of consumers, and in 1976 it was suggested to be PFOA or a related compound such as PFOS.  In 1997, 3M detected PFOS in blood from global blood banks. In 1999, the U.S. Environmental Protection Agency (USEPA ) began investigating perfluorinated compounds after receiving data on the global distribution and toxicity of PFOS, the key ingredient in Scotchgard, Teflon and numerous stain repellents. PFOS compounds can also be found in some impregnation agents for textiles, paper, and leather; in wax, polishes, paints, varnishes, and cleaning products for general use; in metal surfaces, and carpets.

For these reasons, and USEPA pressure, the primary American producer of PFOS, 3M, announced, in May 2000, the phase out of the production of PFOS, PFOA, and PFOS-related products. PFOS and PFOS-related chemicals are currently still produced in China.

Advances in analytical chemistry in recent years have allowed the routine detection of low- and sub-ppb (parts per billion) levels of PFOS in food, wildlife, and humans.

The PFOS levels that have been detected in wildlife are considered high enough to affect health parameters. Recently, higher serum levels of PFOS were found to be associated with increased risk of chronic kidney disease in the general US population, consistent with earlier animal studies.”

Wikipedia details some specifics on the effects of PFOS. “It (PFOS) has been shown to affect the immune system of male mice at a blood serum concentration of 90 parts per billion, raising the possibility that highly exposed people and wildlife are immunocompromised.” “Immunocompromised”  translates to having an impaired immune system. The advisory issued by the ADPH suggests only one “meal” of fish per month caught in the affected water be consumed.

An Environmental Protection Agency (EPA) 2014 fact sheet  titled, “Emerging Contaminants Fact Sheet – PFOS and PFOA” also provides pertinent information. “An ‘emerging contaminant’ is a chemical or material that is characterized by a perceived, potential, or real threat to human health, or the environment, or by a lack of published health standards.

A contaminant may also be “emerging” because a new source or a new pathway to humans has been discovered or a new detection method or treatment technology has been developed (DoD 2011).” The fact sheet continues, “PFOS and PFOA are extremely persistent in the environment and resistant to typical environmental degradation processes. As a result, they are widely distributed across the higher trophic levels and are found in soil, air and groundwater at sites across the United States. The toxicity, mobility and bioaccumulation potential of PFOS and PFOA pose potential adverse effects for the environment and human health.”

Some of the environmental impacts of PFOA and PFOS are also pointed out in the 2014 EPA factsheet.

– PFOS and PFOA have been detected in a number of U.S. cities in surface water and sediments downstream of former fluorochemical production facilities and in wastewater treatment plant effluent, sewage sludge and landfill leachate (EPA 2002b; OECD 2002).

– In their anionic forms, PFOA and PFOS are water soluble and can migrate readily from soil to groundwater, where they can be transported long distances (Davis and others 2007; Post and others 2012).

– The wide distribution of PFCs increases the potential for bioaccumulation and bioconcentration as they are transferred from low to higher trophic level organisms. Because of their persistence and long-term accumulation, higher trophic level wildlife such as fish, piscivorous birds and other biota can continue to be exposed to PFOS and PFOA (EPA 2006a; UNEP 2006).

What are the routes of exposure and the health effects of PFOS and PFOA? Again, directly from the aforementioned EPA factsheet:

While there are scores of additional studies and documents, I think you have here a fairly good idea about what PFOS is and what issues can result from exposure- for humans and wildlife.

Part Two of this commentary deals with some real life situations involving PFOS from a fisherman’s point of view. Part Three looks at causes of the contamination of PFOS in Wheeler Lake, data and information from ADEM regarding PFOS and the Decatur, AL area plus “extended” contamination on Wheeler with advisories on other north Alabama lakes and waters.

Meanwhile, avoid the south side of Wheeler Lake from Dry Creek, just below Ingalls Harbor, and seven miles downstream, roughly across the lake from Browns Ferry Nuclear Plant (mile marker 303 to mile marker 296).