Jay Johnson, his wife and two children load up the boat and hit the water every Saturday for a day of fishing and swimming. The fishing goes pretty well with several bass and bluegill tucked away in the livewell. The kids get tired of fishing, as kids do, so the water activity turns to swimming. Of course water always gets in the eyes, ears and mouth during the frolicking. Jay and family load the boat on the trailer and head for home. Dad cleans the fish, mom cooks them up and everyone enjoys a big fish dinner.

The following week, Jay and his wife are watching the local television news and see a story about some kind of “advisory” about their favorite lake. Upon investigation, Jays learns that a chemical called “PFOS” was contaminating parts of the lake. One of the contaminated areas was where his family fishes and his kids had swum.

Not only was there exposure to the water but fish from the area was eaten by the family as well. Jay calls the public health department demanding to know why no warning signs were posted at the ramp. And, even warning buoys on the water should have been in place. He was told an “Advisory” had been posted on a website address he had never heard of and reading it was his responsibility.

Bill Carter had always fished to supplement his family’s food supply. His favorite bank fishing spot was just downstream from one of the ramps on the lake. He always parked his truck at the ramp and walked to his spot. Since times were kind of hard, Bill fished every afternoon and fish was the main dish most dinners.

Fishermen could unknowingly be fishing in PFOS contaminated water.

One such afternoon Bill ran into a fishing friend in the parking lot. His buddy asked if he had heard anything about some kind of bad toxin in the lake. Of course he had not. Bill found out that the state public health department had advised eating no more than one fish a month. His family had been eating way more than that most every day. Bill also discovered from his friend that his fishing spot was included in the toxic area. Why had somebody not put up signs or something to warn people about the lake contamination? Having no computer, Bill was at a loss to where he was supposed to find out about a chemical in the lake that could make his family sick.

The Big Bass Fishing Club had scheduled a club tournament on a local lake. Members of the club scattered over the lake at start time looking for the winning weight. A couple of boats from the club were fishing in the same area of the lake. They were maybe a mile apart but both were fishing in toxic water for contaminated fish. Both boats were having some luck at their respective spots so the livewell was pumped full of water to keep their catch alive for the weigh-in.

Unknown to the club members, both boats were fishing in an area of the lake that was under an “Advisory” for toxic contamination. No signs were evident at the ramp they launched from or at any of the other ramps used for practice before the tournament.

After the weigh-in, the club members from both of the boats that fished the “bad water” released their contaminated fish in an area of the lake not under an advisory. The livewells were drained in the parking lot with the contaminated water draining into the “clean” water.

Unknown to the bass fishermen, they had introduced contaminated fish and water from the toxic area 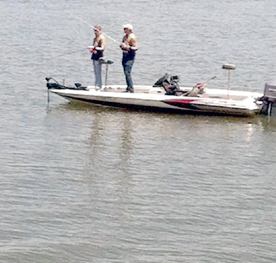 At least one area bass club has put Wheeler Lake off limits for club tournaments.

on the other side of the lake to a non-contaminated area. Of course, the livewell water would possibly be diluted in the clean water to a point where there was no significant transfer of  harmful contamination. However, the fish released were still contaminated and available to be caught and eaten from an unsuspecting fisherman.

At least one area bass club has made Wheeler Lake off limits for club tournaments.

These stories could easily be duplicated in reality. Why? Because there are no public warning signs at any ramp on Wheeler Lake warning the public about the dangers of contaminated water, contaminated fish, the advisory area and any other pertinent information. A least effort approach of posting a notification on a webpage is not a responsible way to inform the fishing and boating public about an “Advisory.”

Is the lack of posting of notice of the health advisory at the location of the danger intentional to prevent a damaging image of the lake, the city, or the source of the pollution?  What good is an “advisory” if no one knows about it?

The Alabama Department of Public Health’s (ADPH) advisory for Wheeler Lake does not take into consideration that fish move around. Obviously, advisories must be based on fish tissue samples from a given area and guessing fish movement would be an inexact science at best. But, fishermen should realize bass can move from an identified contaminated area to an uncontaminated water area.

Using an acre of 100 feet wide and 435.6 feet long, a bass roaming from the home range at a distance of 73 acres would be 6.02 miles. A bass that moves within a 1.5 acre distance from its home range moves .12 miles. The average movement from a bass’ home range of 19.5 acres is 1.6 miles. Rotate the acre 90 degrees and you would have roaming distances of 6.02, .12 and 1.6 miles across the lake instead of upstream/downstream.

Movement rates of bass averaged 31 yards/hour. The highest movement rates occurred during warm summer months. There is little night movement throughout the year (17% to 73% of daytime movement). (1)

The study indicates to me catch and release is still a good idea. But, relating to the stories above, catch and release can put contaminated fish in non-contaminated water. Still, the best option is to not fish in the advisory area and pump water into your livewell well outside mile markers 296 to 303 on the south side of Wheeler Lake.

Warning signs at Wheeler Lake ramps and other access points would be a good first step to keep fisherman and boaters from wandering into the contaminated water.

Part Three of my commentary will dig into data and reports relating to PFOS contamination on Wheeler Lake.