Montgomery said he began his day fishing banks in clear water in an area on the south end of the lake. He said he used a black and blue Strike King Rage Blade Swim Jig rigged with a black and blue Big Bite Baits Cane Thumper.

“I fished it as slow as I could around the banks and had three keepers within the first hour,” said Montgomery.

Around noon, Montgomery said he adjusted and made a run to new types of structure in a nearby area. 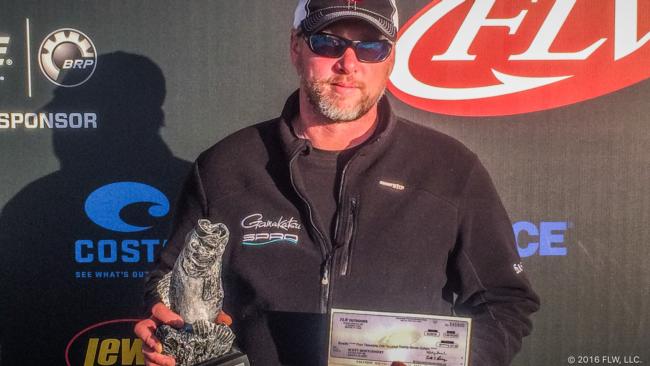 Montgomery said he began his day fishing banks in clear water in an area on the south end of the lake. – FLW photo

“I could tell the bass I was catching early on were smaller males that had moved up and were getting ready to spawn, so I went looking for staging areas,” said Montgomery. “I wanted to hit the first drop out of the spawning pockets, especially where it was deep. That’s where I figured the bigger fish would be.”

The Alabama angler said he switched to a Carolina-rigged, Hematoma-colored Big Bite Baits B2 Worm in the new area and used it to catch the remainder of his winning stringer.

The top 10 boaters finished the tournament in:

Complete results can be found at FLWFishing.com.

Hubbard caught the biggest bass of the tournament in the pro division, a fish weighing 6 pounds, 15 ounces and earned the day’s Big Bass award of $575. 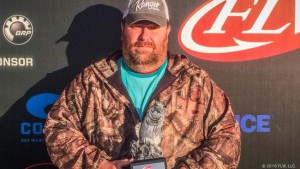 The top 10 co-anglers were:

Rega caught the biggest bass of the tournament in the co-angler division, a fish weighing 6 pounds, 12 ounces and earned the day’s Big Bass award of $287.

The BFL is a 24-division circuit devoted to weekend anglers, with 120 tournaments throughout the season, five in each division. The top 50 boaters and co-anglers from each division qualify for a regional tournament and are competing to finish in the top six, which then qualifies them for one of the longest-running championships in all of competitive bass fishing – the BFL All-American. Top winners in the BFL can move up to the Costa FLW Series or even the Walmart FLW Tour.