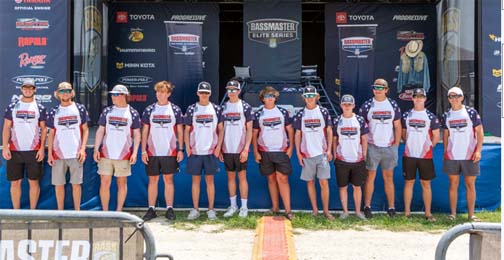 They’ve been taking one another’s money for years.

But on Saturday, they teamed together to win the Bassmaster High School All-American Exhibition Tournament presented by Academy Sports + Outdoors at Lake Quitman. They were one of 12 teams — each made up of an Elite pro and an All-American — who were allowed to weigh in one bass apiece.

Hopper weighed a 6-pound, 7-ounce largemouth, and Hamner weighed a 9-7 lunker that ranked as the largest of the event, and the pair won with a Texas-sized two-fish total of 15-14.

“Fishing one day with an Elite pro gave me a whole new perspective on things,” said Hopper, who lives in Chelsea, Ala. “There’s a certain mindset you have to have to compete in this sport, and I understand that now. I didn’t think about it this way before, but now I see what it takes.

“If you’re not fishing to win, you shouldn’t be out there.” 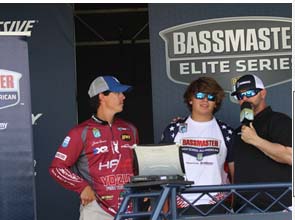 Like most of the All-Americans, Hopper has aspirations of fishing at the professional level — and Hamner said he’s well on his way to being ready.

“We caught a 6-pounder off a brushpile, I caught that 9-pounder and we lost another one that was about 8,” Hamner said. “Then he caught that 6-pounder on a frog. It was a great day.

“Braxton and his dad have been hurting people’s feelings in the tournaments I fish back home for a long time. So, I knew he could fish before he ever stepped in the boat.”

While two Alabama anglers who were familiar with one another took first, the two anglers who finished second were about as different as they could be.

All-American Rein Golubjatnikov, a self-described “shallow-water specialist” from Pittsford, N.Y., was paired with 1993 Bassmaster Classic champion and 1994 Angler of the Year David Fritts, a Southerner who’s known as one of the best offshore anglers in the history of the sport.

They stuck with Fritts’ specialty, graphing deep-water areas until they found just the right spot for a Carolina rig. Golubjatnikov caught a 4-4 and Fritts caught a 4-1 for the second-place weight of 8-5.

“We spent about half an hour graphing and we found a gravel pile and basically stayed there all day,” Golubjatnikov said. “We just went back and forth through there throwing different baits and the Carolina rig is what worked for us.

“If you’re not fishing to win, you shouldn’t be out there.”

“He’s pretty much the opposite of me. I pretty much became an All-American from catching smallmouth shallow. So, I definitely learned a lot today.” 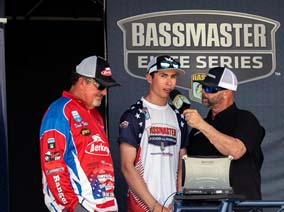 All-American Rein Golubjatnikov, a self-described “shallow-water specialist” from Pittsford, N.Y., was paired with 1993 Bassmaster Classic champion and 1994 Angler of the Year David Fritts.

Though they’re different, Fritts said one thing about the young man was familiar.

“Just the energy and enthusiasm he has reminds me of me at that age,” Fritts said. “He’s kind of quiet, listens really well, just wants to soak it all in. It’s been my experience that those are the kinds of people who succeed in this business.”

The 12 Bassmaster High School All-Americans were chosen during an annual process earlier this year that involves hundreds of applications from all over the country. The winners were announced in late April, and on Friday they were treated to a banquet at Academy Sports + Outdoors in Greenville, Texas, where they taught a fishing clinic for children from the Boys & Girls Club and then were treated to a shopping spree inside the store.

The All-Americans also received swag bags with everything from tackle and clothing to Humminbird LakeMaster cards chosen specifically for the region of the country where they live.

“When I first found out that High School All-American was even something that could be done, I told myself no matter what I did, it would go toward getting to this moment right here,” Hopper said. “It’s been everything I dreamed it would be.”