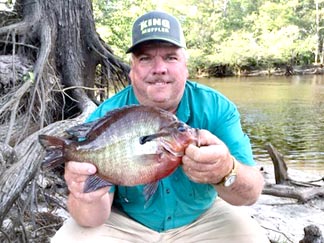 The latest state record fish, and pending world-record tie, is a redbreast sunfish caught by Lester Roberts of Blackshear. His catch, caught on May 7 on the Satilla River near Folkston, weighed 1 lb, 12 oz and was 11 3/8 inches long, and replaces the 1998 record (1 lb, 11 oz), according to the Georgia Department of Natural Resources’ Wildlife Resources Division (WRD).

What is the world record Redeared Sunfish