Hartline and Vaughn win ABT Lake Guntersville with 24.57

Scottsboro, Ala June 11- With this being the final event of the season for the North Division, teams were not just competing to claim the $10,000 first-place prize in this event. They also competed throughout the season to accumulate AOY points hoping to finish in the top 75 to qualify for the ABT championship. 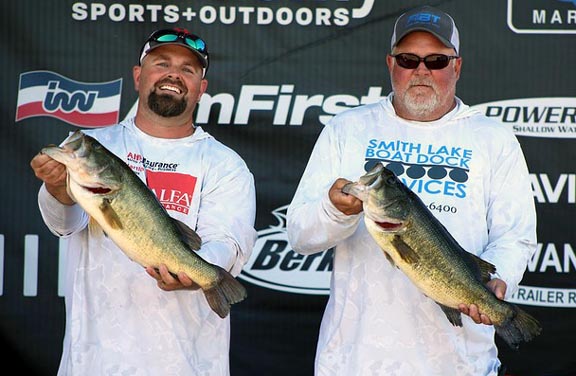 Jerry and Robbin were boat number 218 to start the day. ABT photo

Teams in the top 9 will qualify to fish the Bassmaster Team Championship, and the team with the highest overall points will be crowned AOY for the north division. With 22 teams catching over 19 pounds and the first-place team of Jerry Hartline and Robbin Vaughn weighing in 24.57 pounds, Lake Guntersville continues to be one of the top lakes in the country.

Jerry and Robbin were boat number 218 to start the day and knew the places they wanted to fish down river would probably be occupied by the rest of the field before they were able to get there. They decided to make a short idle over to the point just past take-off and start fishing which would give them the opportunity to fish without having to share water with other teams. They went to work fishing in the grass using a buzzbait and a ChatterBait looking for the early morning bite. “We caught a keeper fairly quickly and had a blow-up on the buzzbait, so we followed up with the ChatterBait and caught a 5-pounder.

…green pumpkin fished weightless and rigged wacky style and an
Evergreen Jackhammer in a chartreuse and shad pattern.

We missed another 5-pounder right after.  We could have weighed in over 26-pounds today, but we missed those. We started working our way down the lake after a lull in the action fishing some areas that we found in practice. Those areas weren’t productive for us, so we decided to try an area about 200 yards down lake, and it was there that we caught our biggest fish of the day (7.35 pounds) on a homemade ‘Parker Jolly Senko.’ There was another lull after that making it almost noon until we got our limit. The key for us was using our mapping to find areas that looked good to us where we didn’t have to share the water with other teams. We are from Smith Lake where we flip boat docks a lot, so we decided if we could flip boat docks, we could flip grass.”

The team caught about 20 fish throughout the day primarily using the Jolly Senko in green pumpkin fished weightless and rigged wacky style and an Evergreen Jackhammer in a chartreuse and shad pattern. With this win Jerry and Robin automatically qualify for the ABT Championship. Before this event they were well out of the top 100, so they were excited to get the win and the $10,000 first place.

The team of Dean Nelson and Clyde Hunt finished in 2nd place with 22.74 pounds and collected $5,000. In practice they spent a lot of time in Roseberry Creek. Late Friday they tried an area down river and quickly caught better quality fish, so 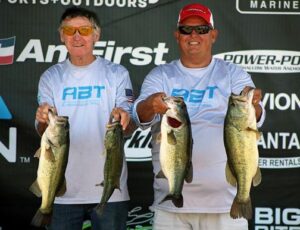 they decided to start there. Taking off as boat 105 they hoped nobody would be on their spot when they arrived. The area they located was in the back of Seibold creak near the Marina. “Our home lake is Weiss Lake, and it doesn’t have as much grass as Guntersville. We fish the grass, but we don’t like to fish it as much. So, we located an area with a little less grass, and we were able to fish it better.” They fished a Dirty Jigs in black, blue and green pumpkin flipping boat docks around the marina along the grass edge. “There were lot of other teams scattered around in the area, but none of them were fishing in our area. We fished the jig by making long casts twitching it back to the boat. Because we aren’t used to fishing the grass, the fish can sneak up. When you’re working the bait back to the boat, sometimes it feels like a wet sock- that’s the bite! You got to be sharp and ready to catch these fish.”

Lance Whitaker and Jeremy Briscoe live on the lake in Browns Creek, so they were able to spend some time practicing a few weeks ago and a couple hours on Friday locating fish. They located a few spots south between take off and the 431 bridge. The plan was to make a run to those spots and fish. They started out boat number 19, and as they drove south, 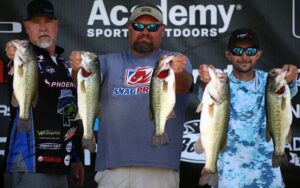 Lance Whitaker and Jeremy Briscoe culled up to 22.56 pounds. ABT photo

each time they passed a spot, they found it was already being fished by other local fishermen. Continuing the run, they ended up in their home creek and decided to fish.  Rotating through baits like NetBait Mini Kickin’, a 12-inch Texas rigged worm, a jig and spinnerbait, they caught a limit of about 17-pounds by 5:45. Catching three more quality fish, they culled up to 22.56 pounds and didn’t catch any other quality fish after 10:45. The team finished 5th earlier this year at Weiss Lake and finished the year 41 in points qualifying for the ABT Championship. With this 3rd place finish, they collected a $4,000 pay day.

The top five standings are below for a complete list of standings please visit: https://www.alabamabasstrail.org/lake-guntersville/results/ 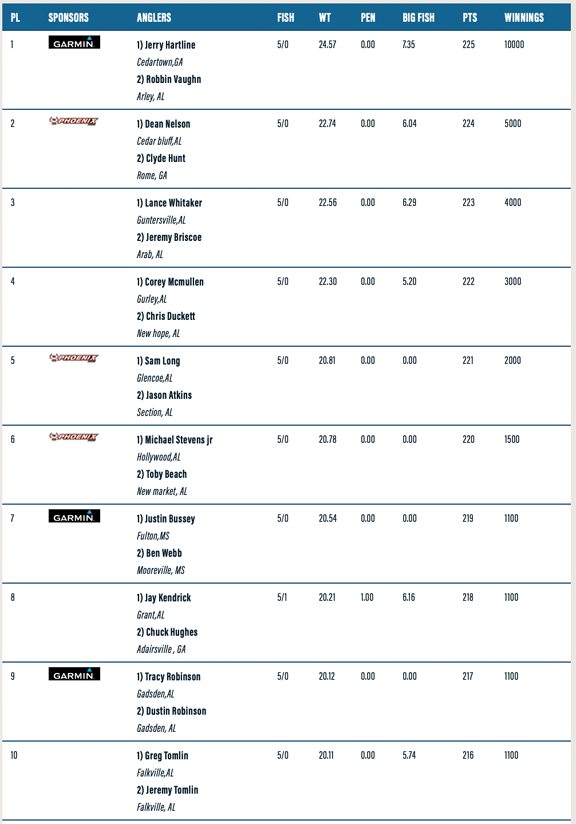