Giant waves and heavy winds prevented them from effectively fishing their preferred areas, 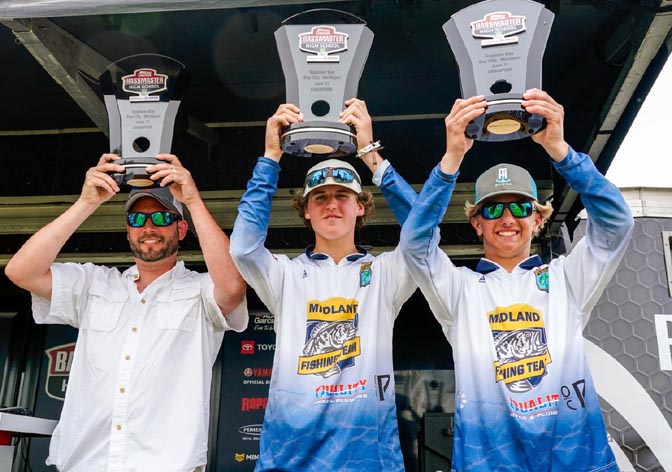 “Once B.A.S.S. announced they were coming here for another high school tournament, instantly we were both pumped and were like, ‘We have to go back-to-back.’ We have some good history out here and got it done,” Pinwar said.

Pinwar and Albrecht were followed by Fenton High School anglers Mitch Straffon and Hank Sturm with 20-7 and the Freeland High School duo of Brayden Ruckman and Nate Helmreich with 20-6, both teams that finished inside the Top 3 during the 2021 event.

“We came into this tournament knowing we had it in us and knowing the same spots stuck around,” he said. “We just believed in ourselves.”

Using an area similar to the one that produced 23-4 during their victory a year ago, Pinwar and Albrecht targeted spawning flats where they could see the smallmouth set up on the bed. A late boat draw Friday night was just the beginning of a number of obstacles they had to overcome to win as the wind kicked up earlier than expected, making sight fishing extremely difficult.

“The waves and the wind were not on our side at all,” Albrecht said. “We were sitting in 5-footers all day trying to catch fish. We stumbled across a few later in the day and then finally on one of our last casts we caught the biggest one.”

“There wasn’t a lot of sun out either,” Pinwar added. “It was obviously hard to see them. For the first half of the day, we were blind casting to try and catch some cruisers. They were either pre-or post-spawn.”

The morning was not as productive as they hoped, as they only landed three keepers by noon. Around that time, however, the sun came out and they were able to see a couple of bass on beds.

Giant waves and heavy winds prevented them from effectively fishing their preferred areas.

“We went up to one bed and there were two fish on it, and we caught them on back-to-back casts,” Pinwar said. “Then we went to one of the big ones we had marked. We caught it at the last minute and went in and got it done.”

All of their bass were caught on a drop-shot rig.

Straffon and Strum wanted to head out to the big water and catch smallmouth as well, but when they completed the idle up the Saginaw River and evaluated the conditions on Saginaw Bay, they turned back and pivoted to the largemouth bite.

“I wasn’t too happy with it, but at the end of the day our safety matters the most,” said Straffon, a member of the 2021 Bassmaster High School All-American Fishing Team presented by Academy Sports + Outdoors. “We knew we had a few fish back here. We didn’t know it would be that much. We put our heads down all day and flipped.”

Using two different colored jigs, they targeted a stretch of main-river bank lined with rocks and laydowns. Most of their bass were located next to the bank while a couple bit as they brought their jigs closer to the drop-off.

“We knew a lot of these fish were super pressured,” Strum said. “We both picked up a jig. We really moved slowly and they would pick it up and swim off the drop.”

Dallas Taylor and Hayden Thomas from Stilwell High School caught the Big Bass of the tournament, a 4-13 largemouth.

Saginaw Bay was the final regular-season event of the year, and now qualified teams will set their sights on Lake Hartwell for the 2022 Abu Garcia Bassmaster High School Championship presented by Academy Sports + Outdoors Aug. 11-13.

The tournament was hosted by the Michigan B.A.S.S. Nation.