Since the fifth grade, Nathan Thompson and Brian Linder have been fishing tournaments together but had never been able to seal the deal on a major victory. 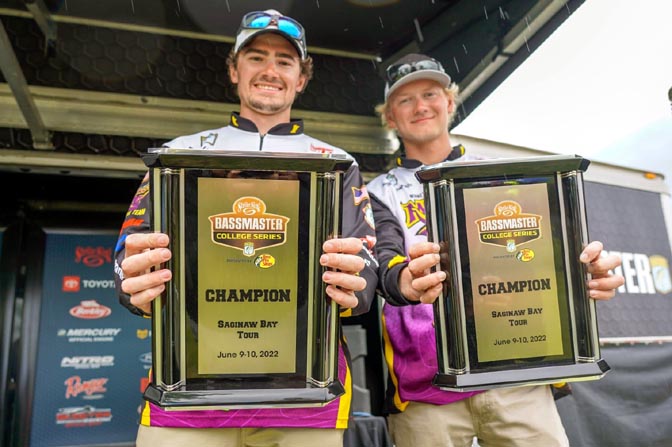 That changed Friday when the Minnesota State-Mankato duo claimed the title at the Strike King Bassmaster College Series at Saginaw Bay presented by Bass Pro Shops with a two-day total of 44 pounds, 3 ounces. The Mille Lacs natives landed in second place with 21-1 on Day 1 before sacking 23-2 on the final day, the biggest bag of the tournament.

“We got close so many times and with this being our last tournament, it means the world to me,” Thompson said.

After falling 9 ounces short at this same event in 2021, Linder and Thompson entered this week with redemption on their minds and beat the reigning champions, Tucker Smith and Logan Parks from Auburn University, by over a pound.

“It is a dream come true. I have been working hard at this my whole life. I never gave up. This is my last college tournament ever and it is a blessing to be able to go home with a win.” Linder said. “We were hungry coming into this tournament. We went off of what we found last year and we wanted to make sure we had enough for the win.”

When they arrived in Bangor Charter Township for practice, Linder and Thompson anticipated the smallmouth would be locked on beds in shallow water. But during practice, they discovered that was not the case and they quickly pivoted to the pre-spawn and postspawn bass.

“Our guts were just telling us this morning that we had to go there.
We gambled and it paid off.”

They utilized two different areas on Saginaw Bay that featured isolated boulders on a sand flat in 6 to 12 feet of water. While they could see the boulders in the water, Linder said if they got too close they would spook the smallmouth. Using their Humminbird 360 sonar, they could locate the boulders while staying far enough away from the target.

Heavy winds kept the Minnesota anglers from making the run to one of those areas on Day 1, but with the wind subsiding during the morning on Day 2, they ventured out to that area and were able to catch their bass before the wind cranked back up.

“The area we fished today we only prefished for two hours,” Linder said. “Our guts were just telling us this morning that we had to go there. We gambled and it paid off.”

An Outkast Feider Fly, a Ned rig with an Outkast Perfect Ned head and a drop shot were responsible for most of their bites this week.

A Magic Boulder: Although they caught over 21 pounds on Day 1, Linder and Thompson only caught six keeper bass. On Day 2, they found the bass were more active in the morning and the quality was better.

“Today we caught our fish off of one big boulder about the size of the boat,” Linder said. “There were fish everywhere this morning and it was an awesome day.”

The duo caught three fish almost immediately on that one boulder. After giving it a short break, they returned and filled out their limit before moving to a different rock and making two important culls.

“In this area, there were multiple boulders and in practice there were fish on every single one,” Thompson said. “But today it seemed like they condensed to one or two of them. Then we culled twice at a different boulder 200 yards away.”

But with the win, the duo earned a berth to the 2022 Strike King Bassmaster College National Championship presented by Bass Pro Shops at Winyah Bay Sept. 2-4, guaranteeing one more event together before their College Series career ends.

Second Place: Tucker Smith and Logan Parks’ bid for a repeat at Saginaw Bay fell just short after they weighed 19-12 on Day 2 to land in second place with a two-day total of 42-11. After a fast start on Day 1 that included a 22-15 bag, the Auburn duo suffered a slow start on Day 2 and had to bounce around to find a limit.

“It has been an awesome week,” Parks said. “We caught a lot of fish and a lot of really big fish. We didn’t really know what we were going to find when we came back up here. We ran into them and had a pretty good event.”

They caught most of their fish on a Berkley MaxScent Flatworm on a 3/8-ounce drop-shot rig.

The strong winds that blew across Saginaw Bay on Thursday subsided some on Championship Friday, something Smith said hurt their quality.

“We caught big ones all day yesterday. I think smallmouth like the nasty weather,” Smith said. “I think that’s when the big ones usually bite. Today we went out there and started on our hole and didn’t catch a fish. We had to go up shallow to catch some. We ended up going back out deep later in the day when it got windier and ended up catching some key fish.”

Fishing areas they used to win in 2021, Smith and Parks targeted prespawn and postspawn smallmouth on rock structures in 10 to 14 feet of water. On Day 2, they were forced to move shallower and catch some bass that were set up to spawn.

Third Place: After weighing a 20-14 bag of largemouth on Day 1, the Lamar State College Orange duo of Dakota Posey and Trent Buchholz doubled down on green fish and sacked 21-7 to land in third place and qualify for their first National Championship.

“We had one big marsh area and it produced enough for us. And for some reason, we had it all to ourselves for two days. It was a big blessing,” Posey said.

Using a spinnerbait and a flapping-style frog, Posey and Buchholz stayed in the Saginaw River and targeted grassy areas that looked similar to waters in East Texas. On Day 2, the frog played more than the spinnerbait and they landed around 100 total bass.

“Yesterday we had 20 pounds in two hours and left,” Buchholz said. “Today it was a little slower. It got hot and dead calm. We stopped throwing the spinnerbait and picked up a frog and it was instant. We worked our way up to 21 pounds. It was a numbers game, we had to work through them and get to the bigger ones.”

Final Thoughts: Just like last year, Saginaw Bay showed out as one of the hidden fisheries in the country. Anglers this week landed 4,750 pounds of bass total during the two-day event with 312 total limits amongst the 189-boat field.

While winds and some thunderstorms forced teams to leave spots in the big water early, smallmouth bags were impressive while those who stayed closer to fish for largemouth caught plenty of numbers as well as quality.

In total, there were nine bags over 20 pounds with multiple 19-pound bags as well.