LINCOLN, Ala. — Lucas Smith and Dalton Mize patiently waited for their moments of opportunity and executed a flawless game plan to win the Strike King Bassmaster College Series Wild Card on Logan Martin Lake presented by Bass Pro Shops with a two-day total of 28 pounds, 2 ounces. 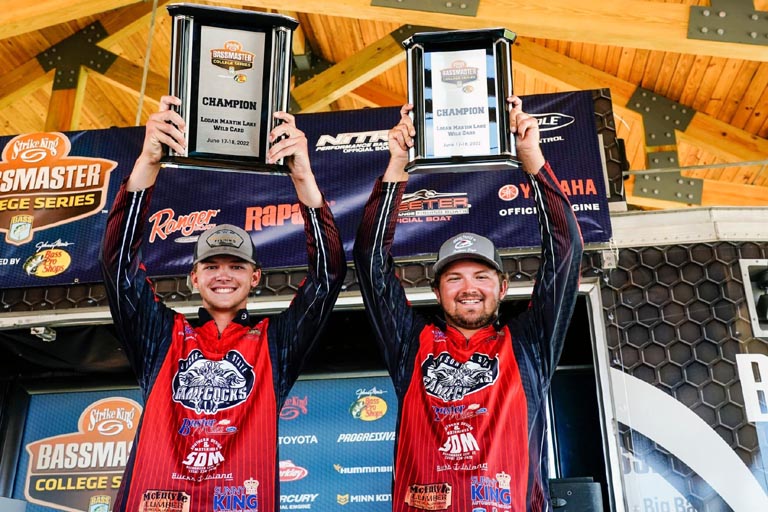 After placing sixth on Day 1 with 12-13, Smith and Mize added 15-5 — the event’s second-heaviest bag, behind Day 1 leaders Jonathon Garbacz and Kevin Dunahoo of the University of North Georgia, who weighed 15-7 in the first round.

“This means the world to us because I know how many great fishermen are in this event,” Smith said. “We’ve had a lackluster year, so this is incredible.”

Mize said he and his partner knew the bite windows would come later in the day. Having faced a similar scenario on Day 1, they knew success would require tenacity and a big-picture vision.

“Both days started off really slow; yesterday we didn’t have a fish until 11 o’clock and today we had one 2-pounder at 11,” Mize said. “It was just a grind out there.”

Currently current: The winners were waiting for Alabama Power to start generating current, as the increased water flow dependably positioned bass and put them in a feeding mood. They filled the day’s earlier hours by fishing shallow cover.

“We had a few key laydowns that we would fish with 1/8-ounce shaky heads and redbug-color Zoom Trick Worms,” Mize said.

Smith said their best laydowns were positioned on the main river. The fish, he said, seemed to be holding in the cover prior to the current starting.

“We had a few offshore schools that were really close to the Lincoln area and that’s what helped us make the key culls,” Mize said. “There were a few different schools and the depth really varied. It was from 6 to 8 feet and some were deeper than 15 feet, but 15 seemed to be that key area.”

The winners caught their offshore bass on shad colored Rapala DT14 crankbaits. Smith said their 12-pound monofilament was a key element, as it allowed them to get their crankbaits down quickly.

Once the offshore bite started, Smith and Mize got their work done in short order.

“Yesterday was more of a grind than today; we didn’t have a limit until nearly weigh-in time,” Smith said. “Today we found one of those magical schools around 11:30 and caught 20 to 30 fish off of it.

“We really thought we needed a bag in the 17- to 18-pound range today. We left some fish out there yesterday to have a bag like we had today, but we didn’t think that it was possible with what we caught today.”

Second place: Tommy Sendek and Cal Culpepper of the University of Montevallo (Ala.) finished second with 26-8. A Day 1 bag of 12-14 put Sendek and Culpepper in fifth place and today they added 13-10.

“We had dialed in what brushpiles we wanted to hit today. We took into consideration it’s Saturday on the Coosa River and knew we were going to have some boat traffic,” Sendek said. “The brushpiles had to be big and fresh — recently dropped in 8 to 15 feet.

“We knew we were going to have to catch them early because that boat traffic and the wind was going to affect our bite. We got off to a good start and dialing in what brushpiles we wanted to fish made us more efficient.”

Culpepper said he and Sendek caught their fish on Texas-rigged Zoom Mag II and a 1/2-ounce Arkie jig with a big skirt and a big trailer.

“I know a lot of guys were talking about how they couldn’t get bit on those baits — and it was a tough bite; we only caught seven keepers each day,” Culpepper said. “I think what separated us was that we committed to it. We knew if we got five bites on them, they’d be a little better quality.”

Third place: Victor Alford and Logan East of Bryan College took third with 25-2. Their daily weights were 12-5 and 12-13.

“We were sitting on the backside of current and stroking a swimbait,” East said. “Sometimes we’d miss a bite and we’d stroke it a few more times and they’d take it.

The tournament was hosted by the City of Lincoln.